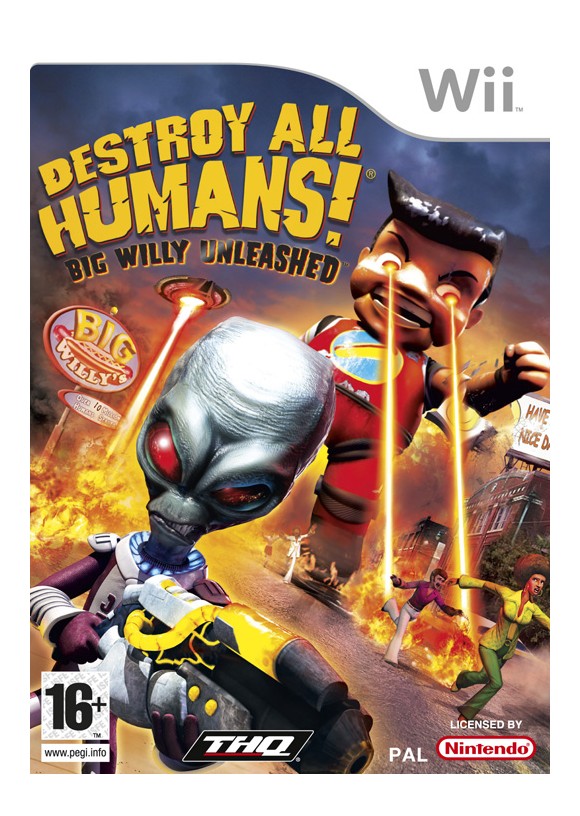 Control Crypto as he travels the world in the Funked Out 1970's, unleashing massive destruction on foot, in his UFO and, for the first time, in the Big Willy mech. Set within an original storyline, Destroy All Humans!(r) Big Willy Unleashed takes players around the world, lampooning hallmarks of the funkiest decade-the '70's. Take on humans and other enemies with a devastating arsenal of weapons and mental abilities-or take to the sky in your UFO to unleash massive destruction from above. Freely demolish 5 invasion sites as you take on over 30 story missions and 30 sandbox missions through three modes of play-Crypto, UFO, and BIG WILLY Mech.

* BIG WILLY - A prototype Furon Mech masquerading as a fast food restaurant mascot - BIG WILLY can destroy tanks or buildings with his massive power, pop humans brains with ease or singe targets with his laser Eye Beams.
* High Fidelity Destruction - Manipulate or destroy virtually anything in the world; on foot, in the air (UFO) or with your BIG WILLY, a giant Furon mech.
* Open World Game play - Explore 5 open world game environments and play through a variety of story missions and side-missions, or destroy everything and anything in sight via open-world sandbox gameplay.
* Multiplayer Modes - DAH! Big Willy Unleashed features all new multiplayer modes.