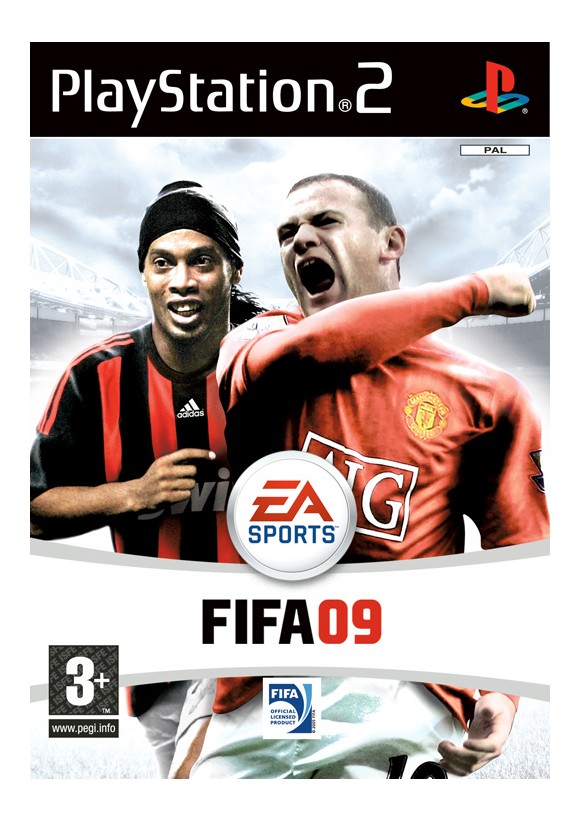 Step onto the pitch and play professional football your way in EA SPORTS FIFA 09. Experience the most authentic football simulation EA SPORTS has delivered on the PlayStation 2 computer entertainment system as you live the fantasy of playing as a professional player.

A new collision detection system with 360 degree coverage and hundreds of new collision animations enable players to behave according to their physical attributes. Player speed, direction and strength now determine everything from the severity of the collision to the outcome of possession. Plus, contact occurs with shoulders, arms and legs. Stronger players possess the strength to knock down smaller players or use their body or arms to win challenges.

Player strength and momentum also determine outcomes in challenges through the new shielding system, with dozens of new outcomes created. Plus, players can now shield the ball by pushing off the defender to create space—at the risk of being called for a foul—just like real life. The increased control shielding the ball adds another strategic element to matches, enabling you to slow the game’s pace as needed.

Changes to the animation system reward the skillful gamer during one-on-one situations between attackers and defenders. Tuned acceleration attributes enable swifter players to possess quicker first steps and gain advantage in sprints. Plus, four new skill moves -- scoop turns, rainbow flicks, heel-to-heel knocks and ball rolls – give you a total of 32 tricks in your arsenal to perform just like Ronaldinho.

From the moment you step onto the pitch, FIFA 09 challenges you to think and react like a real football player through the popular feature innovation Be A Pro -- now expanded to multiple seasons and featuring the unique Be A Pro camera that tracks your player, re-creating the excitement and rush of racing in on goal. In Be A Pro: Seasons you choose a professional player or create your own player and then develop his skills at a single outfield position until he becomes a national legend. Play with up to three friends playing all fixed to single players on your favorite club. Complete individual challenges to develop your player attributes and win glory for the squad while competing against friends to develop the best player.

Enjoy top football action at your own level of ability with the new smart play controls. Passionate football fans new to gaming can play like a professional controlling only the shooting and passing using a two-button control system and gradually master all of the controls as they become adept. With new Smart Play controls and an assist from the AI, gamers can learn at their own pace and still play entertaining matches with more advanced players.

* 500 New Animation Sequences — The largest overhaul of the football animation system delivers more responsive, intelligent and realistic physical action. Players move more fluidly around the pitch. Smaller, nimble players possess quicker first steps and have the advantage in sprints.
* New Collision Detection System — With 360 degree coverage players behave according to their physical attributes. Stronger players now possess the strength to knock down smaller players during collisions or use their body and arms to shield the ball in challenges.
* New Shielding System —Player strength and momentum determine outcomes in challenges. Slow the pace of a game with increased control shielding the ball, enabling you to bring support players into the action. Plus, players can push off defenders to create space—at the risk of being called for a foul.
* Pro Skill Moves — Four new skill gives you a total of 32 tricks in your arsenal, making it easier to recreate signature moves of the real-world superstars. Now perform scoop turns, rainbow flicks, heel-to-heel knocks and ball rolls just like Ronaldinho.
* Smart Play Controls — Pass, shoot, and score using a graduated control system. Start with the simplified two-button control system and then learn more controls at your own pace on-the-fly. Now even players new to the game can challenge the best.
* Be A Pro: Seasons — Pick a professional player or create a player and test your football ability over four seasons. Master positioning, improve your attributes and develop into an elite player. Co-operate with up to three friends fixed to their player on the same team, but compete with those same friends on individual challenges. All performances are tracked through detailed statistics.
* Be A Pro Camera -- The unique player-focused Be A Pro camera debuts on PlayStation 2 to immerse you into the action. The new camera tracks your player, re-creating the excitement as if you were on the pitch yourself.
* Manager Mode – Featuring new options for pre-season friendlies, and the ability to create formations to customize your club for each opponent. Tournament Mode – Play 61 tournaments, including 42 officially licensed ones, or create one of your own.
* Challenge Mode – Take on the challenge of overcoming a variety of difficult scenarios to earn rewards and unlockables.
* Complete Authenticity — Over 500 licensed teams and 30 leagues all accurately represented with correct kits and badges.