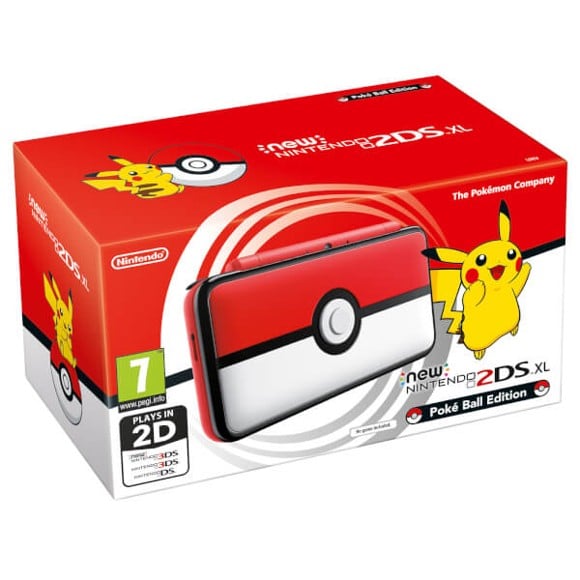 This New Nintendo 2DS XL features the design of the iconic Poké Ball and comes with a free Poké Ball maxi poster.

The new clamshell-design system will be available in a stylish Black + Turquoise colour, as well as White + Orange, and will use the same size large screen found on New Nintendo 3DS XL systems.;As the name of the new system implies, visuals will be displayed in 2D only. The system is lighter but still packs the same power as New Nintendo 3DS XL, and has built-in NFC support for amiibo cards and figures (sold separately). It can play the massive library of quality Nintendo 3DS, New Nintendo 3DS and Nintendo DS games in 2D.;Nintendo systems are the only dedicated video game systems where people can find their favourite characters and game franchises, such as Mario, Peach, Yoshi, Kirby, Pokemon, Fire Emblem, Mario Kart, Super Smash Bros., Animal Crossing and The Legend of Zelda.;There are over a thousand games in the Nintendo 3DS game library and more are always on the way, including three that launch on the same day as New Nintendo 2DS XL. These new games will offer fun new experiences for New Nintendo 2DS XL owners, and for owners of any Nintendo 3DS family systems.