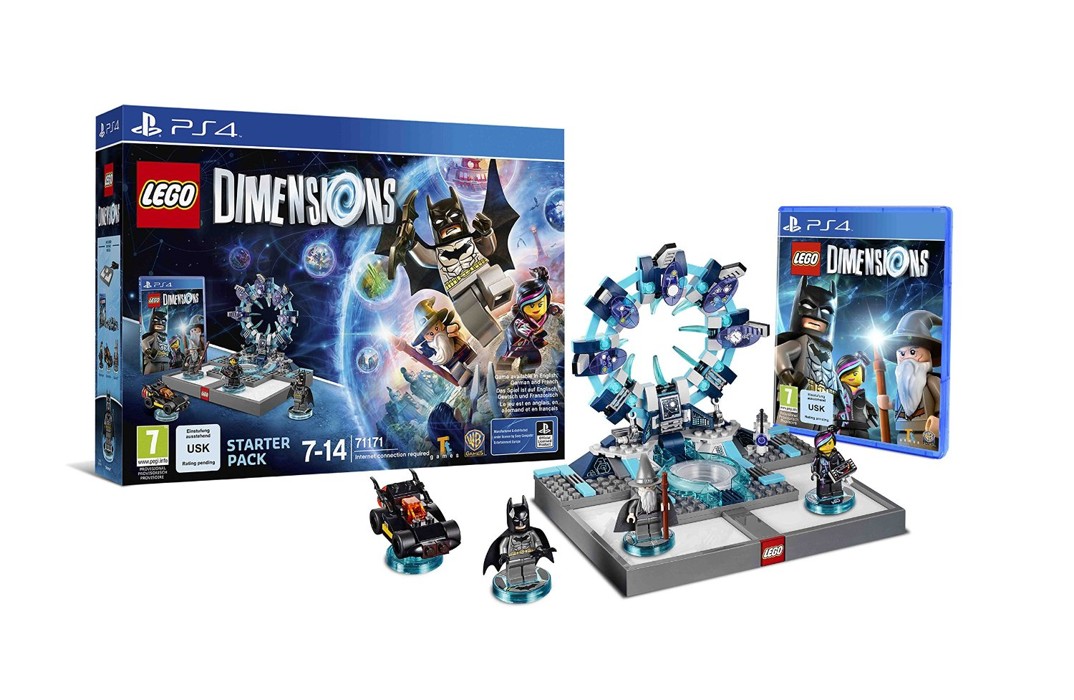 What is LEGO Dimensions?

When a mysterious and powerful vortex suddenly appears in various LEGO worlds, different characters from DC Comics, The Lord of the Rings, and The LEGO Movie are swept away. To save their friends, Batman, Gandalf, and Wyldstyle bravely jump into the vortex and quickly find themselves fighting to save all of LEGO humanity.

Let creativity be the guide to a building and gaming adventure – journey through unexpected worlds and team up with unlikely allies on the quest to defeat the evil Lord Vortech. Play with different minifigures from different worlds together in one LEGO video game, and use each other's vehicles and gadgets in a way never before possible. LEGO Bad Cop driving the DeLorean Time Machine... why not?! The LEGO Ninjago Masters of Spinjitsu fighting alongside Wonder Woman... yes, please!

Everything you need to play

Get ready to break the rules, because the only rule with LEGO Dimensions is that there are no rules.

The LEGO Dimensions Starter Pack is all players need to begin – build the base and embark on a fantastic quest. Included in the Starter Pack: LEGO Dimensions video game, LEGO Toy Pad, bricks to build the LEGO Gateway, three LEGO minifigures (Batman, Gandalf, and Wyldstyle), and LEGO Batmobile vehicle.

Build the minifigure heroes and fire up the game to start the experience, then follow the in‐game build instructions to assemble the loose bricks into the LEGO Gateway, and place the structure on the LEGO Toy Pad. Expand the adventure by collecting more minifigures, vehicles, gadgets, and new levels with the purchase of three different types of expansion packs. Use whatever minifigure with whichever vehicle or gadget – go ahead, break the rules!

For the first time in any LEGO video game, characters from a mix of some of the best brands in the universe join forces and battle in worlds outside of their own. A Dark Knight, a wizard, and a LEGO Master Builder travelling together down the Yellow Brick Road is just the beginning...

By purchasing additional expansion packs, players can grow their collection with a variety of their favourite brands to create even more crazy combinations.
Bring up to seven minifigures, vehicles, and/or gadgets into the game all at once by dropping them on the LEGO Toy Pad for the most exciting and action‐filled game around.

Play alone or with a friend

Players can let imagination guide their solo journey, or have a friend join the adventure with cooperative drop‐in/drop‐out play.

The starter pack will last

There is an ancient planet at the centre of the LEGO Multiverse inhabited by an evil mastermind, Lord Vortech. It is said that he who controls the Foundational Elements that this planet is built upon controls all of the Multiverse. Lord Vortech has vowed to be that ruler, summoning characters from a variety of LEGO worlds to help him find these building bricks of LEGO civilisation. Some have agreed. Others have rebelled. And only the combined powers of the greatest LEGO heroes can stop him.

When a mysterious and powerful vortex suddenly appears in various LEGO worlds, different characters from DC Comics, The Lord of the Rings, and The LEGO Movie are swept away. To save their friends, Batman, Gandalf, and Wyldstyle bravely jump into the vortex. As they journey to locations beyond their wildest imaginations in search of their friends, they soon realise that Lord Vortech is summoning villains from across different LEGO worlds to help him gain control. As his power grows, worlds mix, unexpected characters meet, and all boundaries are broken. Our heroes must travel through space and time to rescue their friends before the vortexes destroy all of LEGO humanity.